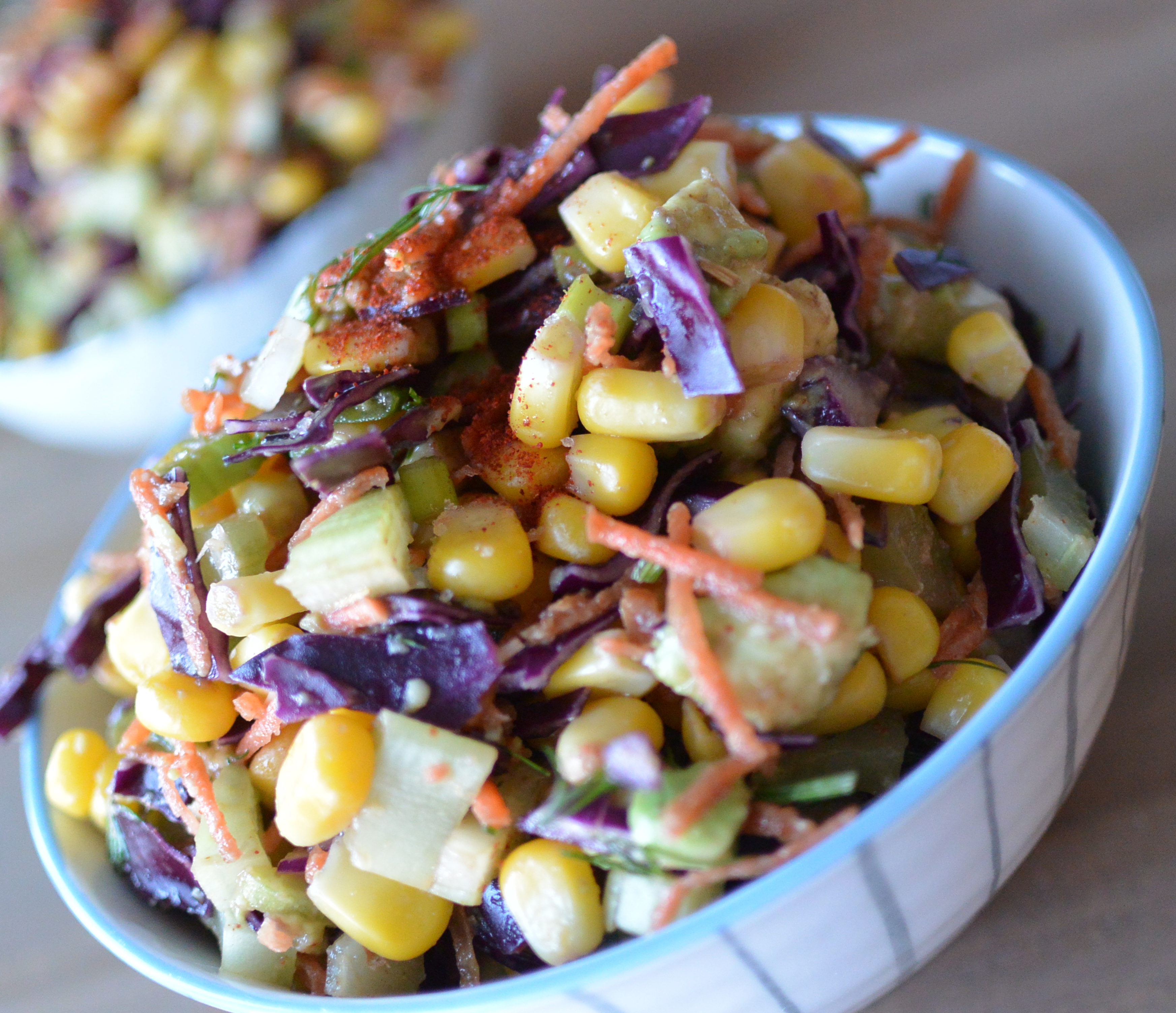 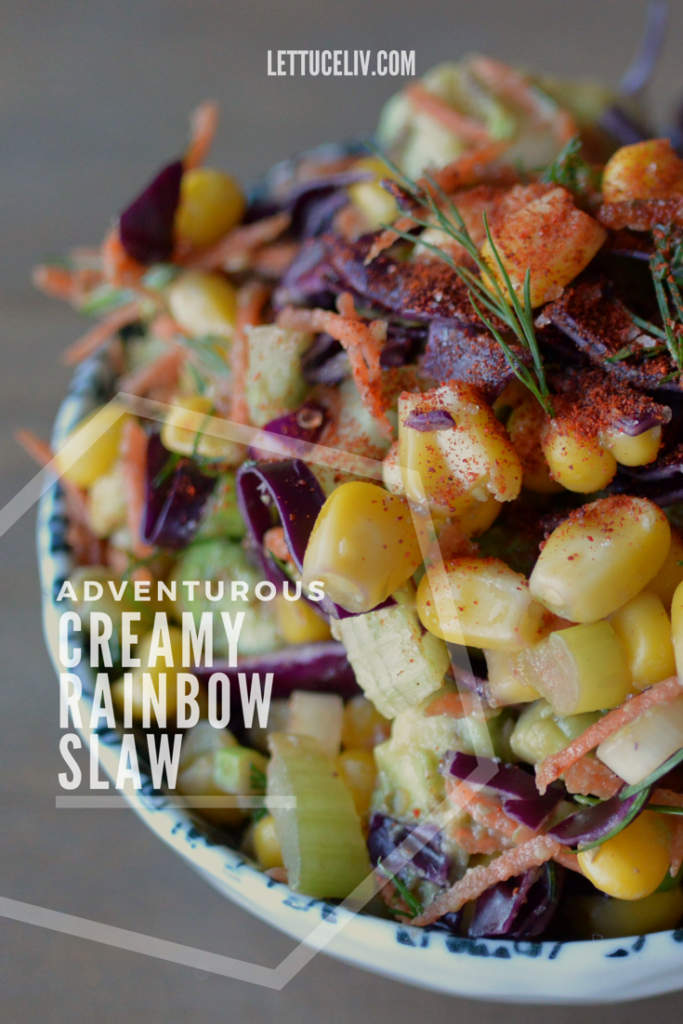 As a vegan, it is very easy to eat the rainbow -so to say. And this little creation is very much the rainbow. It’s a creamy rainbow slaw. I feel more than ever, maybe because its finally spring and the snow should be melting and tulips should start budding… (I say should because its still cold in Montreal and we still have so much snow on the ground) that my plate is filled with brightly coloured veggies and I’ve become obsessed with chipotle peppers… Have you noticed that most of my dinner recipes have chipotle peppers as an ingredient!

So, my criteria this past little while has been, bright and colourful and SPICY! I wonder if this is my brain and stomach telling me I need a travel adventure? Maybe a trip somewhere warm? Bermuda? Actually, I’ve been to Bermuda and I loved it! I went with my parents and brother a few years before I got married. I have a funny little story about my father and I. It shows that we are both very head strong and fearless people! 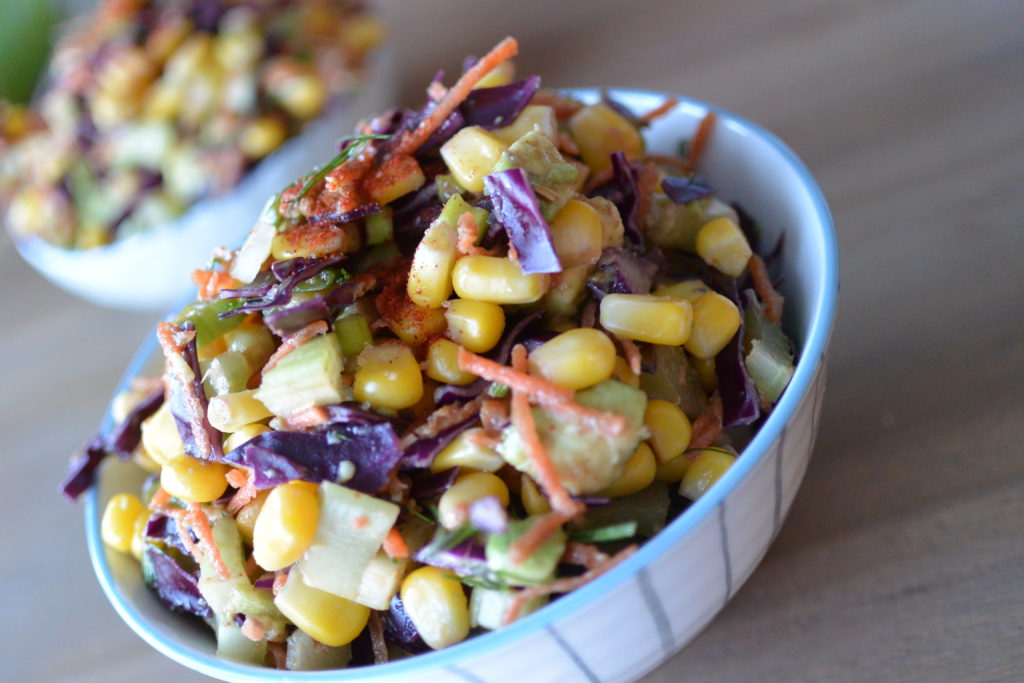 So, before Bermuda I have never scuba dived or snorkel before. And the beach we went to in Bermuda was called snorkel park… OBVIOUSLY, we had to snorkel RIGHT! But seeing as both my father and I are very stubborn and head strong we ignored the instructions and just decided to rent the snorkel mask and mouth piece… we thought it was stupid to rent the fins…. So, we begin our journey casually swimming along the beach and as time went on we went further and further in the coral… I have to sigh here and shake my head because looking back at our complete stupidity and lack of experience we both could have gotten hurt really bad.

The first indication that we were way over our heads was that at one point I stood on a piece of coral. (THAT MY FRIEND THIS IS A NO GO!) second indication my father felt a burning sensation on his foot and leg (later we realised he cut himself on the coral) and the third indication was we were both so unexperienced that we weren’t able to actually appreciate the beauty that is the coral reef and the wonderful fish that live around it.

When we got back to shore we both agreed that we should have been a lot more vigilant and we should have invested that extra 5$ for the fins… because my dad had a piece of coral lodges in his foot (not a huge piece but like a splinter size piece …that would only come out after 2 months (YES TWO MONTHS AFTER OUR VACATION the splinter was finally removed) Talk about a souvenir! 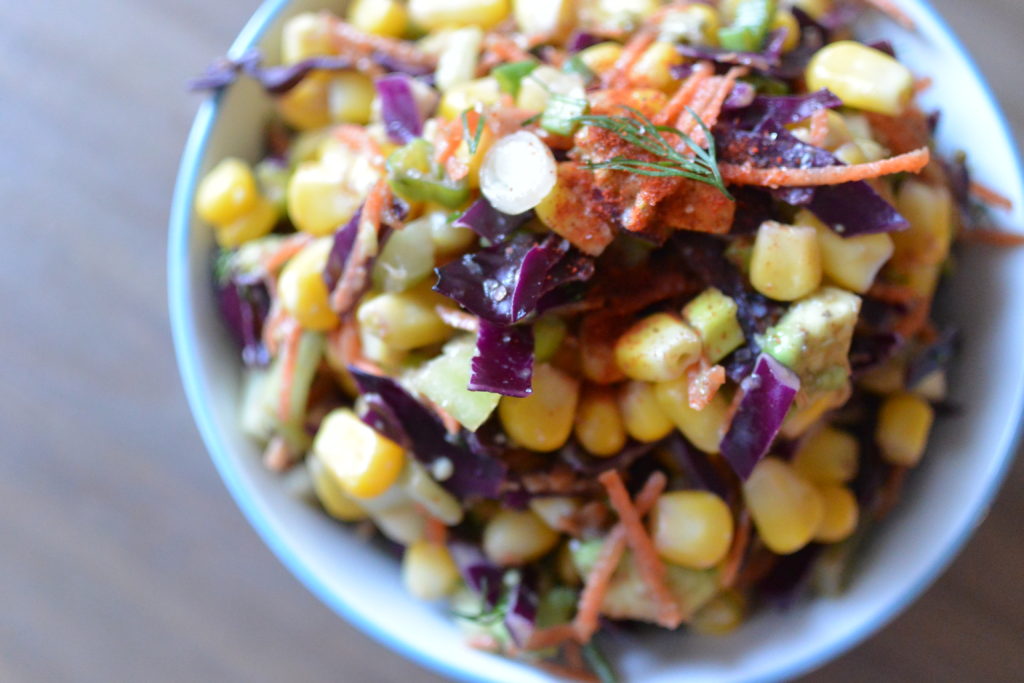 What I learnt from all this

Finally, what I took from this experience was to always be prepared, follow instructions and please respect nature. I also after this became bit by the snorkel bug because the beautiful wonders and sights that we explored took my breath away.

Later on, my husband and I have gone on many snorkel and scuba dive adventures in French Polynesian, Bahamas the Dominican and even in Florida! So, although my first experience was not the best and it isn’t a story that I should be proud of but it is none the less a story with an important lesson.

I have clearly rambled on about a passed story. The only reason I remember it was because I noticed my trend these past few weeks… Of wanting bright and colorful food with a little bit of a spicy punch. I hope this recipe will bring you back to a tropical vacation and bring out some found memories!!

This creamy rainbow slaw is really easy to make. It requires very few added seasoning, I used fresh dill, chipotle powder pink Himalayan salt and apple cider vinegar. Because corn is not in season I used frozen corn. In the summer when corn will be sold fresh on cob, this recipe will be great with BBQ chard corn! Everything else I used fresh veggies! 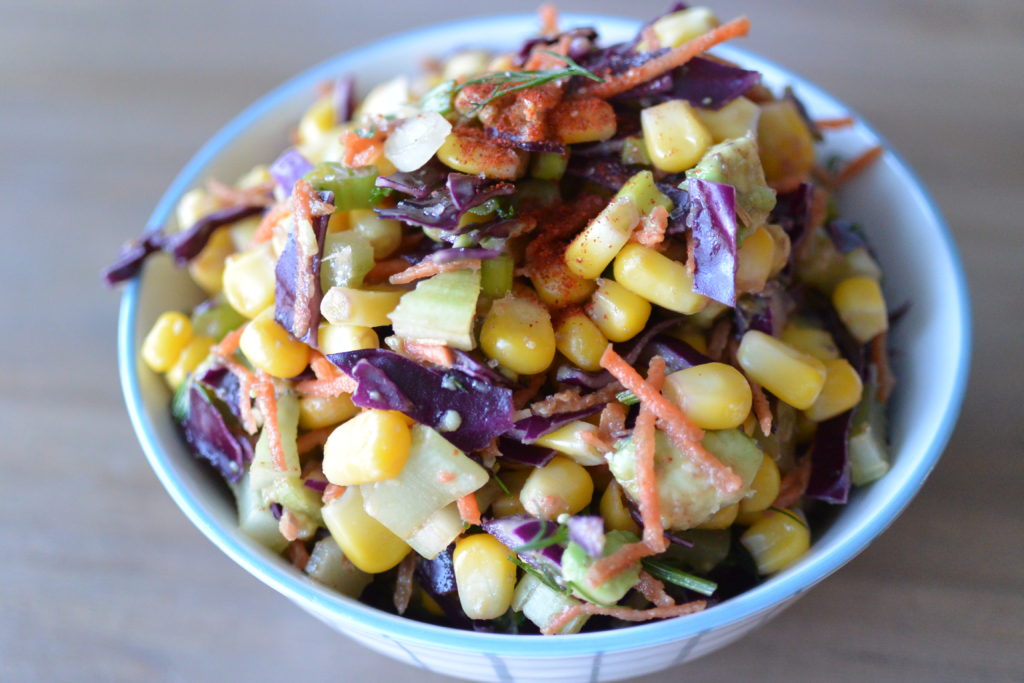 Basically, you will need to have cooked corn about a cup, 1-2 avocados diced small. About 1/3 cup of julien sliced red cabbage,1 -2 stakes of celery, chopped. 1-2 carrots grated or chopped and about 2 whole shallots (also stems chopped in) Mix in a bowl. Add in apple cider vinegar, fresh dill, salt and chipotle powder, and BOOM that’s it your done. ENJOY right away or store in fridge and eat later. Either way you will have a deliciously easy rainbow slaw for you to enjoy.

Please let me know if you enjoyed the creamy rainbow slaw recipe by sharing it on Facebook, twitter and Pinterest. If you have any feedback, I’d love for you to comment below. Have you done anything on vacation that in retrospect you would have avoided or done differently? 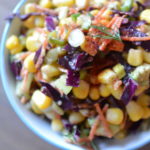 As a vegan, it is very easy to eat the rainbow -so to say. And this little creation is very much the rainbow. It’s a creamy rainbow slaw. I feel more than ever, maybe because its finally spring and the snow should be melting and...