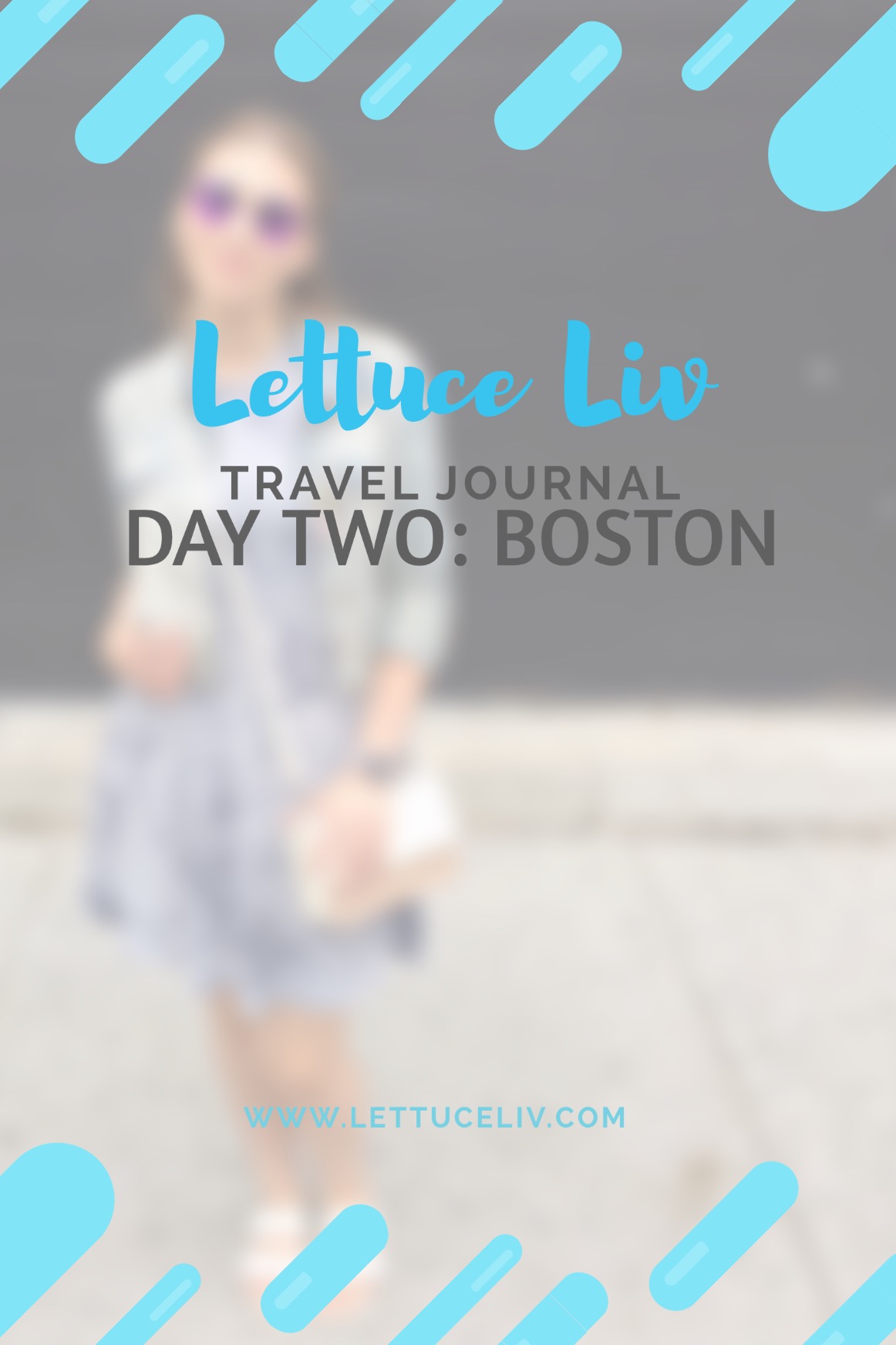 Today we woke up with the plan to have breakfast, check out Harvard and Cambridge area and then head over to Boston city centre, and eat more food! We woke up a little later then we had expected. I find I always sleep past the alarm in hotels because of blackout curtains and extra pillowy soft mattresses! By the time we hit the road it was already 10:30. We head over to Cambridge for a late breakfast.

We choose to have breakfast at VO2 vegan cafe. This cafe is actually located in a yoga studio which is a really concept! Rob and I choose our meals and sat down to wait for them. Rob noticed how much variety he felt cities in states had so much more variety. But I don’t exactly feel that way. We looking up vegan restaurants VO2 was the only fully vegan restaurant in the Cambridge area. I am happy that within the last few years Montreal, has really turned into a hub for vegan cuisine. The options are incredibly and there is so much variety! 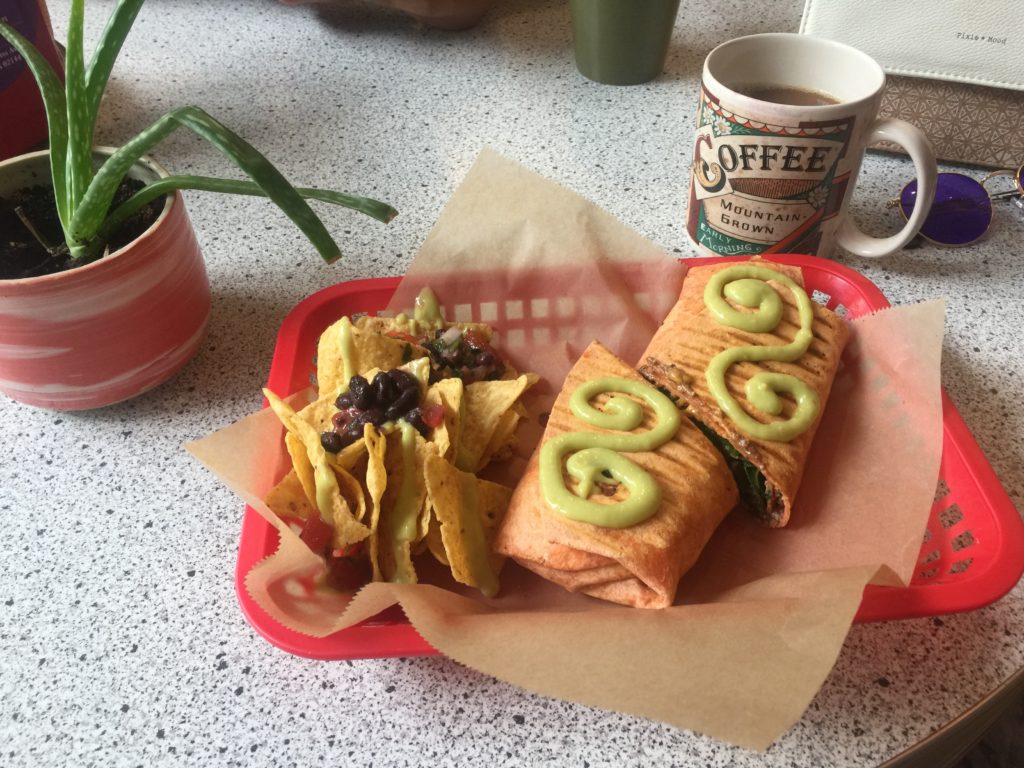 This isn’t to say VO2 vegan cafe, was bad. It was out of this world delicious. Rob hates the taste of tempeh. He says it has too much texture and is very nutty. The meal he choose for breakfast was a bagel with tofu, smoked tempeh avocado and a whole bunch of yummy dressings. He maws freaking out how crazy good the tempeh was!!! My meal was a yummy tofu scrabble with black beans wrapped in a tasty fajita bread drizzled with home made vegan nacho cheese spread! Our late breakfast which was actually a lunch was Pure bliss. So satisfying and yummy!

We finishing eating ridiculously fast, so fats in fact that I’m sure the waitress was disturbed with us! We picked up our things and started the short walk to Harvard main campus. Honestly I didn’t know what to expected. I was a bummed because it had strayed raining and we left our umbrellas in the truck. Walking into the main area of Harvard I was so underwhelmed I guess living in Montreal and working near McGill university I expected Harvard to have a similar layout. Even the Concordia NDG campus has a more exciting campus layout then Harvard… I don’t know maybe rob and I got lost and we weren’t actually at the right part of campus I don’t know. 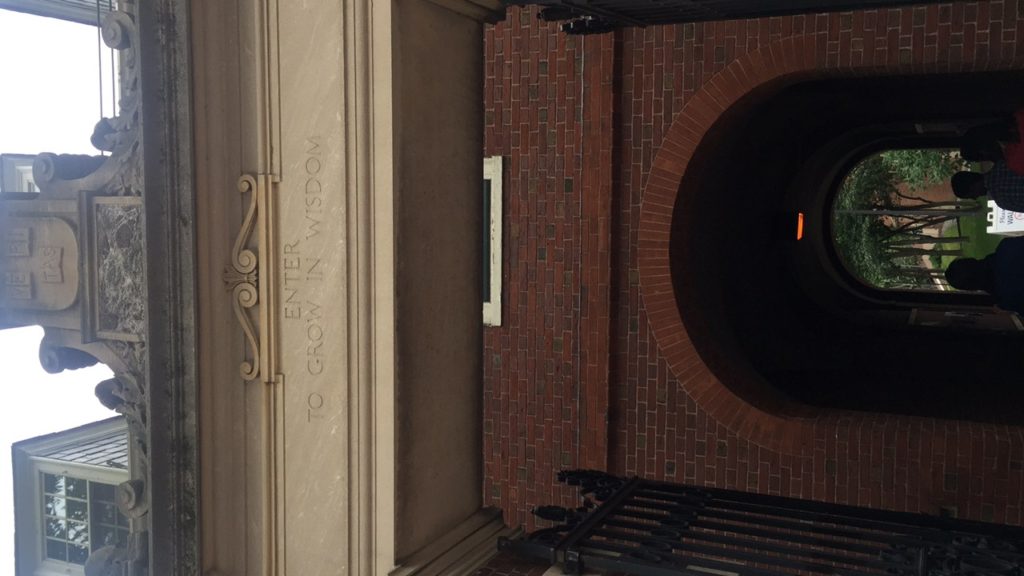 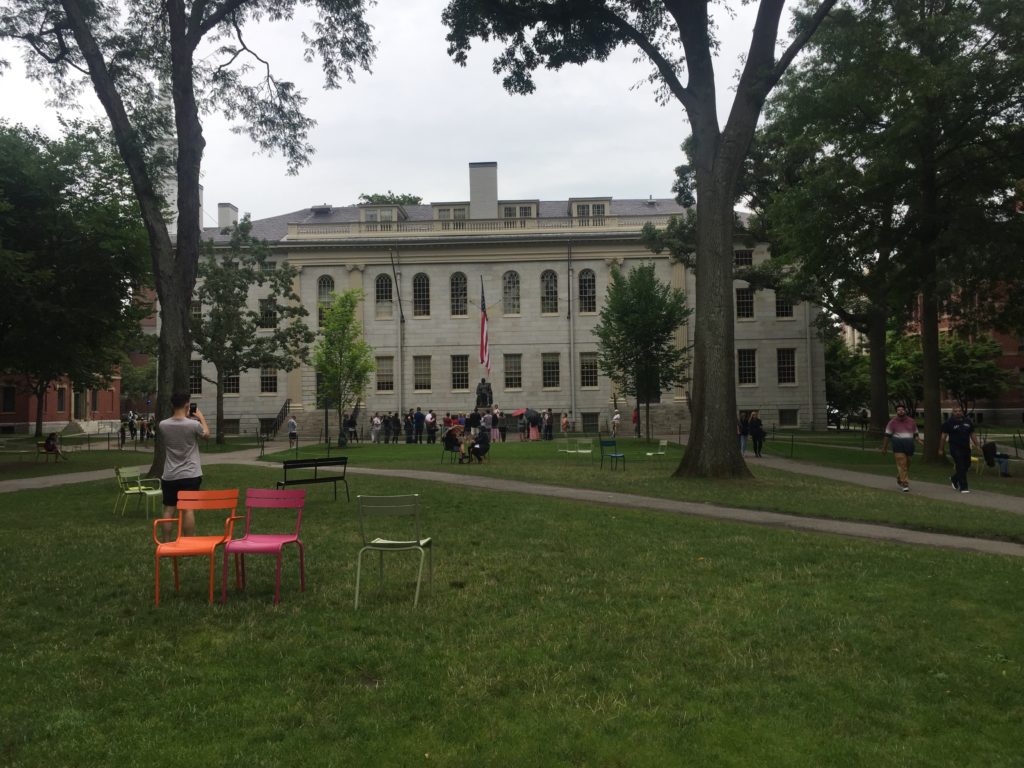 In Boston we drove through little Italy and I fell in love with the narrow streets and the charming brink buildings. We didn’t stop though because we could not find parking and we refused to pay 38$ for barely 2 hours of parking. 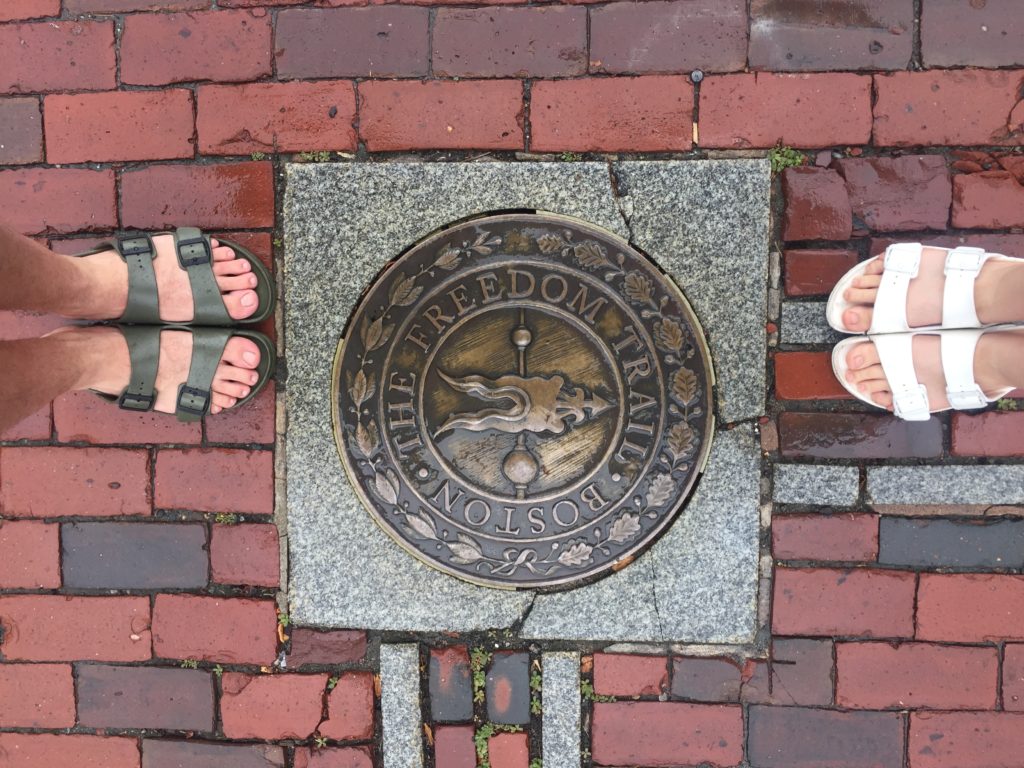 So we drove and actually found parking near the beginning of the freedom trail. Because it was still raining we took out our umbrellas and decided to walk the trail , check out the historical sights along the trail and shop… like I mentioned before it was still raining… and once we reached… wow I did not pay attention at this point to anything but once we reached the building with the gold lion and unicorn on the roof ( I know it has historical significance but I was tired, it was raining and I was getting hungry again) we decided to give up the trail walk back to the car and check out whole foods market. 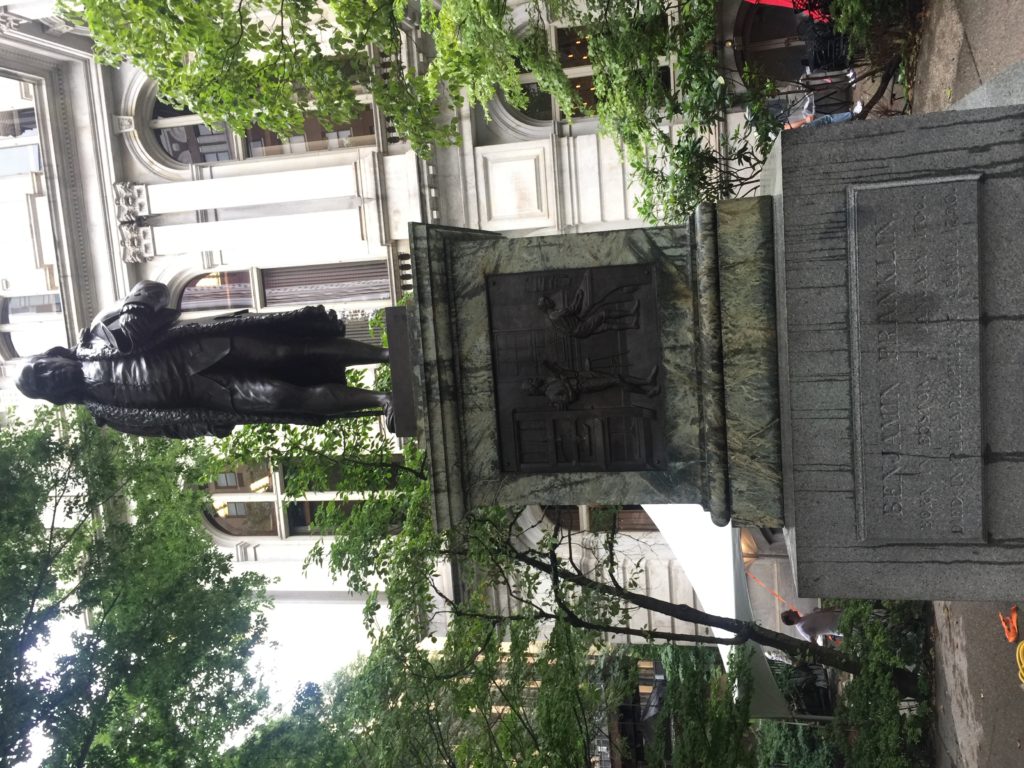 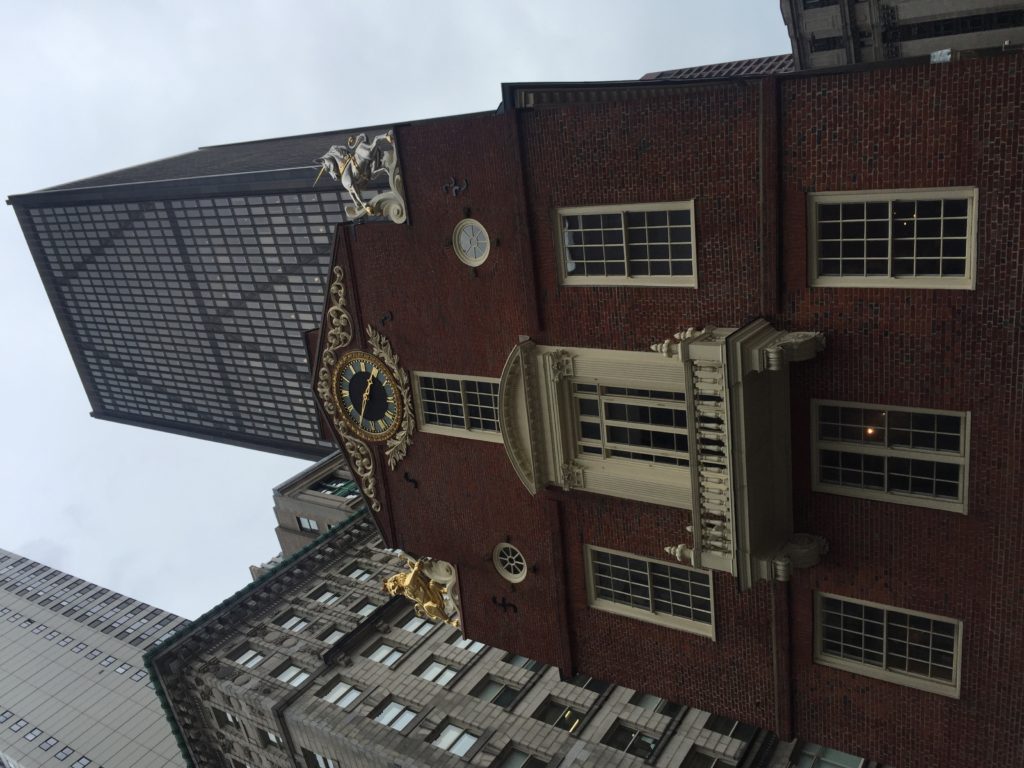 Montreal does not have a whole foods. Rob and I drive to Ottawa every once in awhile and check out the whole foods. So when I’m in the States I like to see what they have. New products, vitamins, food, what ever really! I remember the last time I was in whole foods in the states I bought a B12 supplement spray from garden of life and I could not find it anywhere in Montreal, or at the whole foods in Ottawa. Well I found it and I also found a generic brand (whole foods brand) B12 spray for half the price so I bought that one also. But now it was 6:15 and rob and I hadn’t eat since 11:30 and we had already walked about 20000 steps.

We choose to try out a vegan restaurant in Boston’s China town area called my Thai vegan cafe. The menu is HUGE! So much variety and selection that we had no idea what to take. We were sitting at the table aggressively asking each other which plate we should get. Rob and I had a macro argument over what vermicelli noodles were! In retrospect we were culled by our HANGRYNESS. I decided on the chefs specialty, a sweet and savoury dish of vegan chicken vegan scallops pineapple and fresh veggies all served in a sliced pineapple. This plate was insane! I am completely inspired and will recreate a recipe of this myself because this plate was so damn good. At this point it had stopped raining in Boston so we were able to walk around China town and soak In some of the city life. Which was nice to see. 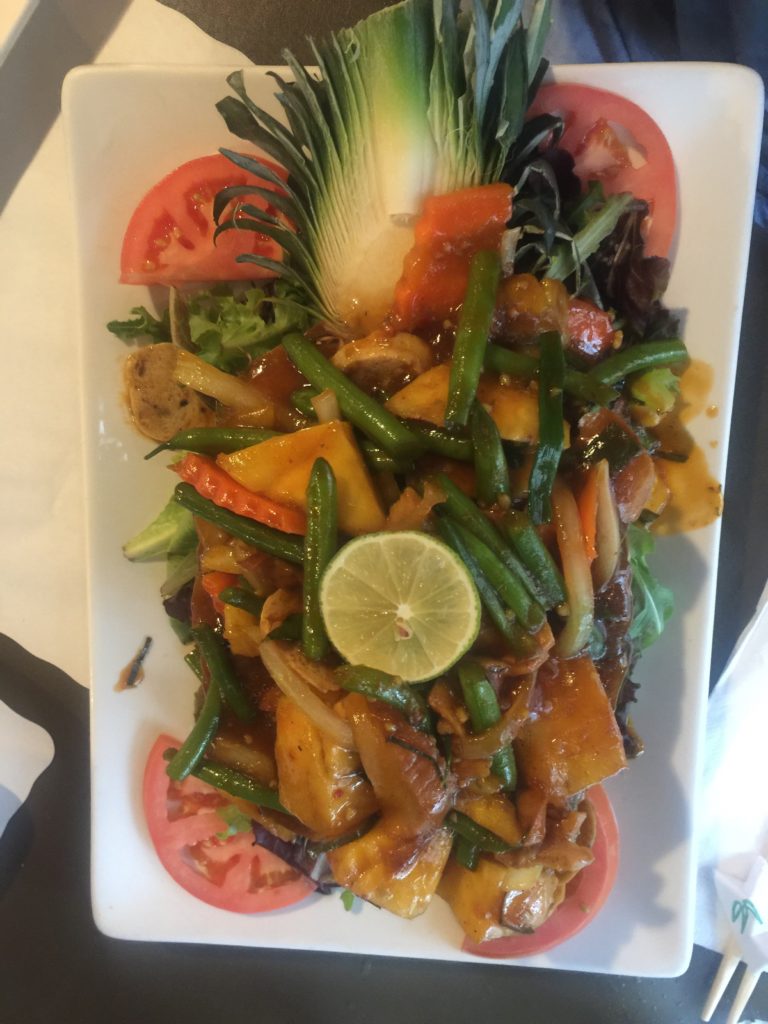 Tomorrow we will be going to Boston harbour because we’ll be docking a cruise ship to head over to Bermuda. I didn’t think this travel journal through very well because internet on cruise ships aren’t the best signals out there so I might not be able to post daily. I’ll have to see what will be my best option.

The cruise we are taking is from the Norwegian cruise line, this post or any of my posts from this trip has not been sponsored by the cruise. But hey Norwegian cruise line if you want to sponsor my vacations that would be super awesome!!!! We will be boarding the Norwegian dawn. We will spend 3 days docked in Bermuda there we will be kayaking, snorkelling and biking the island! I am super excited and can’t wait to share the experience with all of you. So if I can’t post anymore posts until I’m back have a wonderful week every body!!